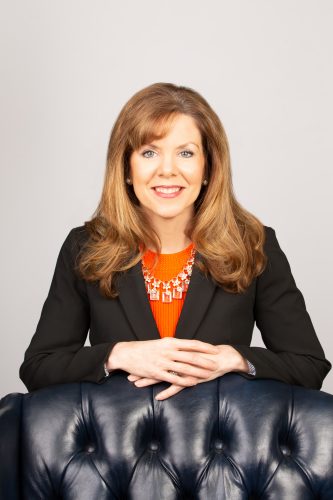 The Oklahoma State University Spears School of Business Hall of Fame will honor its 2021 inductee, Melinda Stinnett, managing director of Stinnett and Associates, at a banquet Nov. 12.

“I got teary when [Spears Business Dean] Ken Eastman called to share the news with me,” Stinnett said. “It’s especially meaningful when I think about clients and mentors who are in the Hall of Fame, such as Gary Belitz. I think that adds to my excitement and feeling of humility in being inducted. It’s definitely not something I expected, but I’m very humbled.”

In September 2001, Stinnett resigned her position as an audit manager with Arthur Andersen in Tulsa for a move to Denver, so her husband — Joel, a pilot for United Airlines — could be closer to a hub. Melinda’s family was also closer, and she wanted to spend more time with their four young children: Amanda, Nate, Josh and Sarah. She decided to offer consulting services in the interim until they moved.

Later that fall, Joel was furloughed from United Airlines and the relocation to Denver was postponed. At the same time, multiple accounting scandals erupted, eventually leading to the Sarbanes-Oxley Act of 2002 (SOX). With her auditing background, Stinnett began providing consulting services related to internal audits and SOX.

In the early days of Stinnett and Associates, she was a one-woman show, handling all aspects of her clients’ needs with a Panera Bread shop serving as a makeshift office.

In 2003, Stinnett met with Dale Wilkerson, vice president and controller at Alliance Resource Partners LP, to propose on their SOX compliance work with her contact information on a yellow sticky note and her credentials printed at a Kinko’s on her way to the meeting.  She won the work and since then, the firm has grown to nearly 100 team members in six cities across three states.

“Joel was hugely instrumental as the business continued to grow,” Stinnett said. “He had a natural business acumen and began doing our taxes, reconciling the books, acting as the head of IT, HR and payroll. His role, especially in the early days of Stinnett, was critical in alleviating the pull on me and allowing me to focus on generating revenue.

“I recall telling him, ‘I’d like to continue doing consulting work and if I run out of consulting projects, then I’ll get a real job.’ And I like to joke that 20 years later, I haven’t had to find that real job.”

Stinnett’s husband is a principal in the Tulsa-based headquarters.

Stinnett’s father, Dennis Middlemist, was a business management professor at the OSU College of Business and her mother, Melanie Middlemist, earned her master’s and Ph.D. in accounting from OSU.

Although Stinnett grew up around the business school and viewed faculty like a second set of parents, she began her college career with the dream of becoming a marine biologist but realized that wasn’t a good career goal in a landlocked state. Stinnett wanted to stay at OSU, so she changed her major to accounting.

Stinnett was very active on campus as a member of the Tri-Delta sorority, treasurer for the Student Government Association, member of the Business Student Council and serving on the homecoming executive committee.

“I loved every minute I was on campus at OSU,” Stinnett said. “There wasn’t any other university out there. In my mind, OSU was the obvious choice.”

The Spears School of Business continues to be a family tradition. Two of Stinnett’s children and one of her daughters-in-law are the third generation to attend Spears Business.

“Andy Urich, who was one of my favorite professors when I was in college, has this theory about luck,” Stinnett said. “If you’re ready and poised when that luck moment comes, you can capitalize on luck and turn it into opportunity, and I feel like that’s what happened for me at Stinnett.”